The meeting started at Balbirnie by looking at some cows being rotationally grazed in fairly tight paddocks on long grass. By keeping the cows tight, they were utilizing the grass well and eating docks and other weed seed heads.  Due to the slow start to the growing season the grass had had a sniff of nitrogen (15kg/ha of urea) to help get growth going.  Next door were two fields of mixed cover crop that would be grazed in late summer to ease the pressure on the grass.  The aim is to graze the cows as late into winter as possible.

Oil seed rape had been broadcast into the previous crops of spring barley.  The rape looked well although there had been an area that had failed to be good enough to keep which had been sown into cover crop for the nearby cattle to graze.  Having livestock available in the system does allow for land still to be utilized if lower cost crop establishment techniques have a higher risk of some failures.

The field of oats we stopped in during the rain was direct drilled after a multi species summer cover crop with a demo Horsch Avatar and looked really well with little previous crop residue left on the soil surface.  The field had not been no till for long, having had potatoes in it, which shows potentially how with the right management, no/less till can work on a semi rotational basis.

The next field was definitely worthy of a photo if I had a working camera so hopefully one will be added in.  Spring beans sown in early April with the John Deere looked really well but with the added interest of varying row widths, and companion crop.  The phacelia was flowering nicely between the rows and just looked right, but I suppose time will tell if the denser canopy would help or hinder chocolate spot.

Hopefully David (Aglen) may be able to expand and explain on all the on-farm trials going on at Balbirnie in February next year when he speaks at the BASE-UK annual conference. 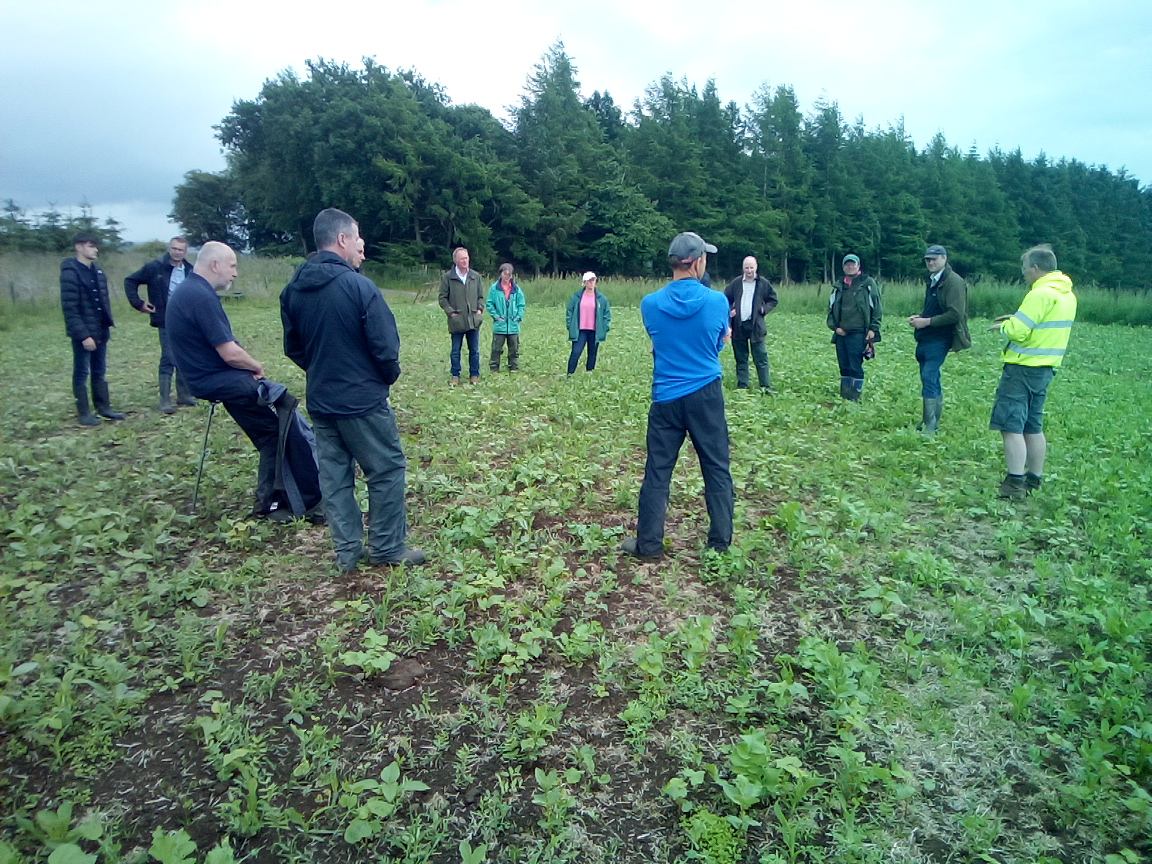 Mixed species cover crop for cattle grazing. Since then, the crop has grown to over 5ft in height. 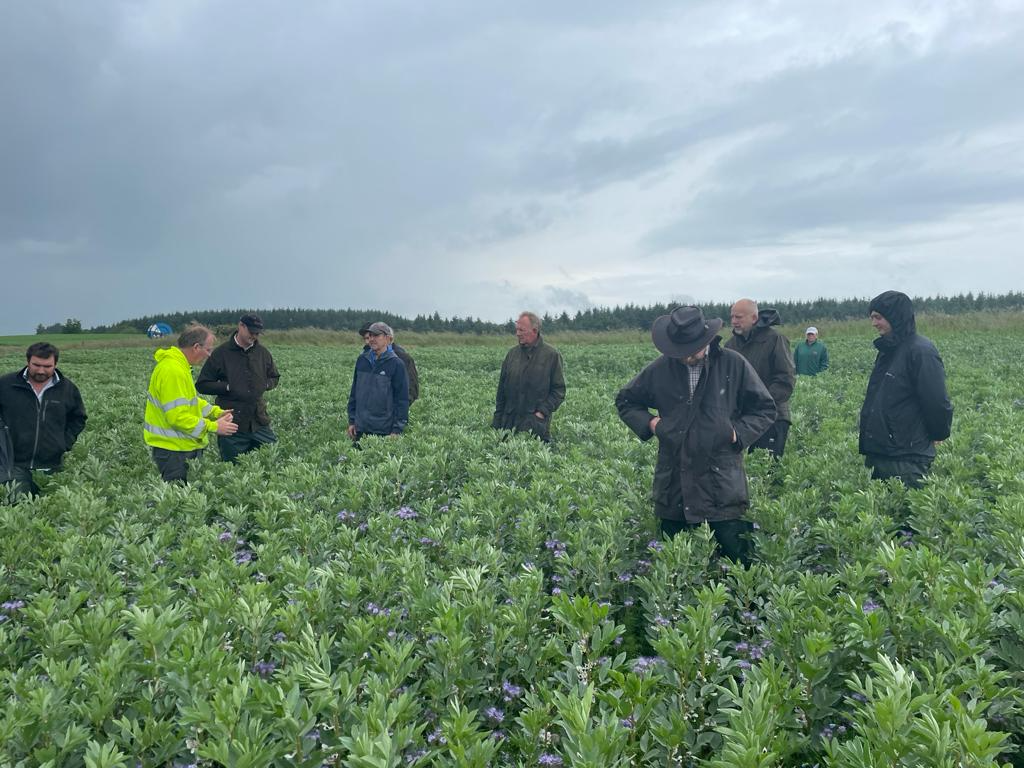 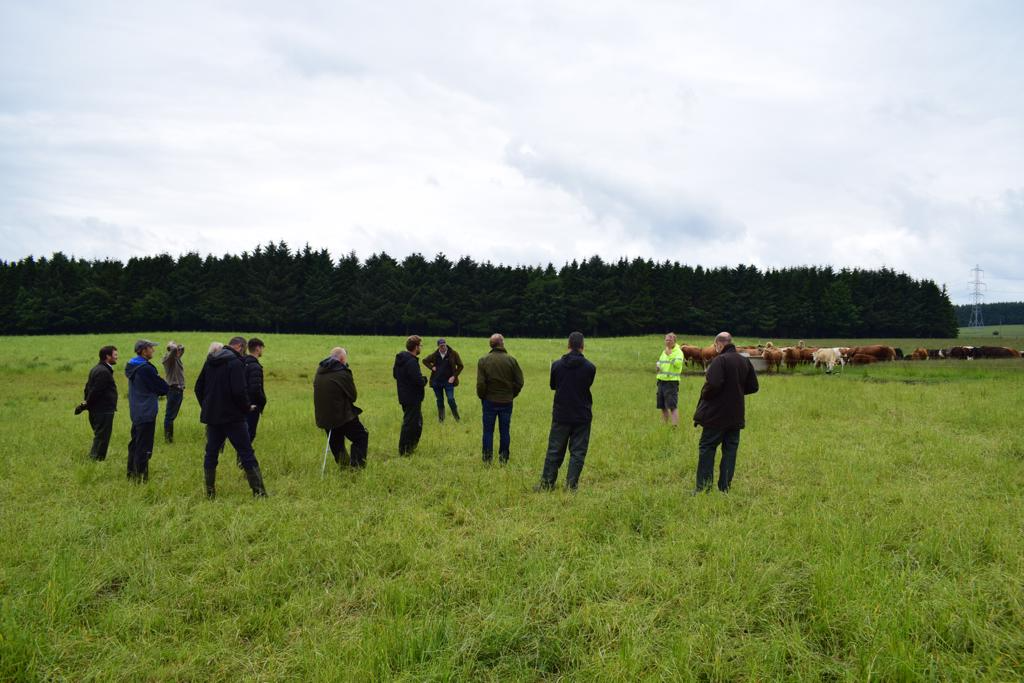 Time had disappeared, so a move was made to Doug’s farm, a short distance away.  Doug’s farm is split between Organic and conventional no-till which I am sure gives him confidence to bring techniques common in either system to the other.

The first field of conventional spring wheat looked well and quite mature.  The field hadn’t been ploughed for twenty years and had been a good number of years with no cultivations.

The cattle the other side of the trees looked in fantastic condition on rotational grazing.  There were about 100 yearlings of mixed sex and two stock bulls.  By putting all young stock together, it eased management and time spent moving fences.  The grass cover they were moving into was enormous with less than 40 days of growth.

The first companion crop field we went in was beans and oats, which Doug was contemplating taking out as it was too poor for him but in fact most agreed it was quite acceptable, suggesting the fields he didn’t show us must have been rather good.  The windrow of compost at the side of the field made only with a telehandler proved that you don’t need fancy equipment to make compost.

The field of linseed and oats were very even.  The area of mono crop linseed had been poorer than the mix throughout the season according to Doug, but it was hard to see during flowering.  The next superb field of wheat had a trail in the corner run by an outside party.  It was amazing how by them disturbing the soil they had released weeds from the seed bank that were not evident in the rest of the field.

By this time, it was fast approaching bedtime and it was decided best to go home.  Both visits had provided much conversation not covered in the summary above and well worth the time taking to attend the meeting.  Thanks to the hosts for taking time to hold the meeting.

Thanks go to Duncan Wilson of Strathmore Farming Co and Doug Christie for compiling this article and David Aglen for his editorial skills and sending photographs.