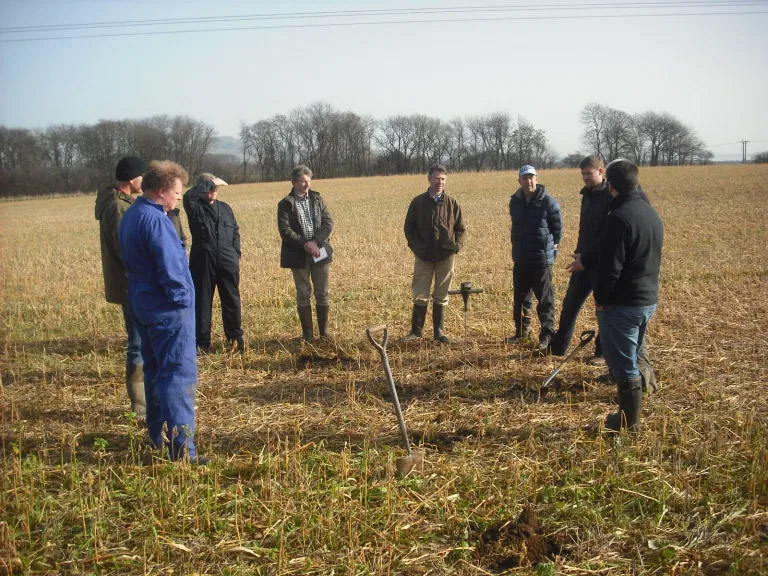 Doug has sent the following report:

We could have not had a better day to ‘chew the cud’ over a multitude of topics discussed.

We started off looking at the James Hutton variety trials under different tillage regimes. Dr Creissen, a Researcher/Lecturer in Crop Protection at SRUC in Edinburgh and IPM specialist explained about the forthcoming trials he will be doing in conjunction with Prof. Adrian Newton (JHI) on the Loirston trust funded project investigating the effect of tillage regime on disease and yield of winter barley with particular reference to trash borne diseases. He also explained and kindly brushed up our knowledge on fungal diseases; how they affect wheat and barley and timings and effectiveness of various control methods.

Forward onto a field where the winter cover crop field had been successfully rolled in a previous frost and and partly unsuccessfully desiccated with rollers after the frost had lifted. However this procedure managed to expose a fair degree of brome present. Comments were also made on the few worms present at that moment in time.

After a brief look at some winter wheat and discussion on nitrogen timings after an unusually inclement mild and dry winter, we then looked at the next door field in which spring bean sowing (again unusually early for this neck of the woods) was underway with a Moore Uni-drill (prompted debate on what drill to use, where and when), but seedbed and soil temperature, as it was, too good an opportunity to miss.
The beans were being sown into a green winter cover crop of oats with a sprinkling of beans which are due to be sprayed off next week with a pre-emergence squirt of PDM and glyphosate.

I found it hard to keep a track of all the discussions going on, of which there were many, but it is all part of the joy of getting a like minded bunch of Farmers and interested parties together for nearly 5 hours discussing their passion and interest in what they do day in and day out.
‘Vive La BASE.’ Doug Christie

“BASE-UK members were kindly invited to Doug Christie’s farm where we all enjoyed a very interesting day in fabulous early spring weather on 26th February.

Over coffee and delicious cake (let’s keep our priorities right!) we made a rule that any chat about Brexit would incur a penalty .

After coffee we looked at a cover crop which Doug had rolled with a Cambridge roller to see if that would kill it off. The area where there was frost on the leaves at the time of rolling had died off pretty well. The area which was rolled after the frost had lifted, hadn’t worked as well, and was still much greener. I think the general consensus was that the technique wasn’t good enough to avoid a follow up roundup spray. However it was very interesting to see and well worth the experiment.

We also looked at a field that was in the process of being drilled with spring beans. Doug introduced each one us by name to his tractor man which was very impressive as there quite a large group , a very good test of memory .

The land was in perfect order for sowing and Doug was using a Moore drill. I am going to grow beans for the first time this autumn so I was paying attention to the discussion about varieties, sowing dates, rates and depth which was both informative and interesting . Sounds like a good option for autumn sowing in Scotland, might be the variety Honey.

I would like to thank Doug very much for his hospitality and for sharing his knowledge and huge No Till experience with the BASE members.

Also a big thank you to BASE as an farmer networking group for learning and support, which is extremely helpful for me and others who are in the transition from a plough based system to a No Till system.” Jock

Grateful thanks to Doug for hosting a successful day and for arranging for Dr Creissen to be there to provide a scientific viewpoint.

If any BASE-UK member would like to host a farm walk, please contact Rebecca on rebecca@base-uk.co.uk who will be happy to help.

Member Meetings with Eric Hegger on 14th and 21st October 2021